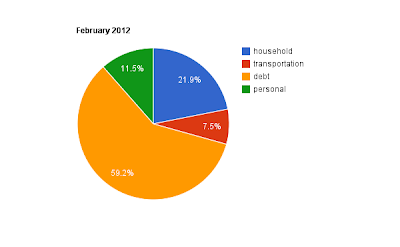 In my ongoing financial makeover, February had some upsides and some downsides.

In the 'upside' corner, we have a massive proportion (59%) of income going directly to debt reduction!  This really took a whack at my consumer debt balance, and will help attain my debt freedom goal that much sooner.  After all, paying it off sooner leads to the balance being lower sooner, which in turn results in paying less total interest, which is a total win.

Now for the challenger.

In the 'downside' corner, I got a bit overzealous with debt payments.  I paid the amount planned for in my debt snowball spreadsheet, and then a few days later I threw a couple hundred more on there for good measure.  Then I looked at the total balance, and hey, it's only a few hundred over an even thousand mark, so I should just knock it down to there.  Round numbers are nice.

Unfortunately, that resulted in an overall debt payment that was more than I should have bitten off.  My total savings (defined as the difference between income and spending) was, drumroll please...

Yes, that's a negative.  I violated the Master Equation.  Okay, so it was in order to pay off debt, which is certainly better than overspending myself in order to buy overpriced and unneeded new shoes, or buying stuff on Amazon.  Still, it's suboptimal.

As a result, I'll be going on a little bit of a debt-repayment fast for a month, and for March I will pay ONLY the amount indicated by my snowball.  No more.  There certainly is virtue in throwing every possible penny at the problem, but that only pertains to real pennies.  Not the ones that deplete the modest cushion I keep in my checking account.  This getting-into-financial-shape project involves not only killing off all my debt, but also becoming intimately acquainted with the meaning of 'affordability.'  Affordability means having the money, not needing it for anything else, and only spending consciously.  Unconscious spending is what leads to maxed out credit cards.  Despite the fact that my overspending was 'for a good cause,' it still doesn't help me learn good money management skills.  So there will be no whimsical extra payments for me, at least until I can build that cushion back up.

While the other categories were certainly dwarfed by the debt pie-slice, they're worth looking at as well.

My mission to reduce the grocery budget took a nosedive, and I spent even more on food in February than I did in January.  Too many Costco trips, and too little planning for sales.  We are getting better at planning out the week's meals, though (more on that soon).  The household category also got hit a little harder than usual this month.  A part on the grill needed replacing, and spring is the best time to do that, prior to the grilling season hitting.  We also needed a new baby gate to keep the dog off the stairs.  The previous one was a $15 pine-and-plastic number, and between us accidentally kicking it when climbing over and the cat launching herself off of it (hopefully someday she'll learn to go over, not just on), it was thoroughly dead.  It was literally held together with zip strips for the last month or so, but ultimately it gave up completely.  I decided to 'splurge' and buy an actually decent one that is made of metal and can swing open.   I figure that otherwise I would have been replacing it every six months or so, and those $15 expenditures add up (not to mention the nuisance of having to go shopping all the time).  Sometimes spending more money is actually a bargain.

Next up is the personal category.  A while ago, my mother sent me an extremely generous gift: two beautiful rings that she didn't wear any more.  One, set with an oversize amethyst, was her engagement ring, and the other is a large heart-shaped zirconia.  Both are gorgeous.  Unfortunately, both were also yellow gold, which goes with nothing I own.  In my ongoing quest to minimize my jewelry collection (I now own five pairs of earrings. FIVE!), it makes sense to have everything go with everything else.  So the majority of the 'personal' category this month was spent to have the rings re-plated in white gold, and one sized to fit better.  It wasn't cheap, but I got to patronize a jeweler I adore, and added two stunning pieces to my much-less-crowded jewelry box.

The main other expenditure was at Goodwill on my birthday weekend, when my good friend took me thrift shopping in order to get me out of the house while Mr. Geek put together my surprise party.  Suffice it to say that there were absurdly many layers of subterfuge involved, and it was indeed quite surprising.  But as for the shopping trip, I acquired a number of well-fitting, professional blazers for work, and a gorgeous pinstripe skirt suit that was promptly worn (after Dryel-ing) for a presentation the following Monday.  Oh, and a few super-shiny gowns that might get to come out later in our ballroom dancing career.  It was my birthday; I refuse to regret that purchase.

Coming in a distant fourth, transportation costs were up a bit from last month, but with gas prices what they are that is hardly surprising.  In any case, transit costs seem to be the least of my worries, despite the crazy commute.

That's where I stand financially, dear blogosphere.  Here's hoping I'll be able to report a positive (or at least non-negative, for crying out loud) savings number next month!
Posted by The Organized Geek at 08:22