...honest discussions about gender politics, as with this amazingly well-written and empowering letter and the comments upon it.  The Internet is an amazing place, and it's full of both thoughtful, insightful people who know how to be civil to one another and insecure jackasses who need to insult each other with every remark for no apparent reason.  It's so nice when the former group can get together and have a real conversation!

To be more on-topic, it's always bothered me profoundly when people use the terms 'girly' or 'gay' to be insults.  A casual 'what a pussy' or 'that's gay' is both incredibly denigrating to a huge proportion of the population and usually completely irrelevant to the topic at hand.  I've heard people call each other gay for the silliest things, like messing up in a game or being late to an event.  What on the green hills of earth does sexual orientation have to do with punctuality?  I was once called a slut for standing in the way in a hallway.  The irrelevancy just about caused my head to explode with confusion even as I was reeling from the shock of the strength of the insult.  What's the point here?

Okay, okay, I know about the male need to verbally bash the bajeezus out of each other in order to show affection.  I don't have to understand it, but I get that it's a thing.  However, there's a difference between calling someone an incompetent jerk (which might be at least subjectively true based on immediate evidence) and using an incredibly personal insult that has nothing to do with what's going on, may or may not be true, and at best denigrates an entire sector of humanity to everyone in earshot.  Associating unacceptable or 'inferior' behavior with being a 'jerk' (or insert your favorite relevant insult here) is one thing (jerk being a descriptor that is defined by such behavior), but associating that unacceptable or 'inferior' behavior with being a 'girl' or a 'fag' is quite another.  What message does that send to any girls who might overhear you?  That they're automatically inferior, and it's a bad thing for anyone to be lowered to their level.  What message does that send to straight men in the room?  That they'd better be afraid of having any 'feminine' qualities.  What message does that send to your friend who hasn't yet quite worked up the courage to tell his buds that he might be gay?  That he's bad, wrong, inferior, and should shut up.

Even if you make the case that the terms have become divorced from their original meanings in the head of the person using them and are generic insults completely devoid of gender-related or sexual meaning, what excuse is that?  Oh, because it's an unthinking propagation of destructive stereotypes it's okay?  Words have power, whether you're bothering to think about it or not.

Wow, that apparently touched a nerve.  I didn't intend to do quite that much ranting on the topic!  Moving on.

Taken from the comments of the above letter:

As soon as children learn that gender roles vary by culture, they can start thinking about what sort of culture they want to see when they’re adults. And that, historically, is how social revolution begins.


Hear hear!  For even more perspective, dig this take on historical gender perceptions!  From that article:

The more research we do, the more it seems like the only behavior consistently considered normal is the tendency to be way too strict about what normal behavior actually is -- and then being really shitty to the people who don't conform.

Pink used to be considered to be infinitely more manly than blue, and the danger of dressing your baby androgynously is that it might grow up to be the president of the united states.  Cultural biases are not only localized in space, but in time.  It's all remarkably arbitrary, which makes it even more ridiculous how fervently people will cling to the discrimination fads of the moment.

And here's my favorite definition from the comments to the open letter linked above:

Homophobia: The fear that gay men will treat you how you treat women.

Ultimately, boys are better at peeing standing up, and girls can grow new humans.  Other than that, we're pretty much people.  Aside from the Grand Unifying Theory of Gender Relations, of course.

Let's teach the next generation a little civility and acceptance, shall we?
Posted by The Organized Geek at 09:15 0 comments

bears, and a dresser top


As part of my mission to declutter, I'm purging things I have sentimental but useless attachments to.

Meet Slick.   Slick was given to me by a very good friend when I was 11 or so.  He's named slick because he is made of a very slippery fabric.  I love ya, B, but I don't need the bear in order to remember that.


As for this bear... he doesn't really qualify as a sentimental item because I honestly have no idea why I have him.  Because he's floppy and fuzzy?  My quota for stuffed animals is much lower now than it was ten years ago, and most of that is filled by my flying monkey, my Lil' Richard (squee!), and my maille-wearing, butter-knife-weilding SCA bear.  This guy gets to go on an adventure with Slick to a fabulous new home.

Fortunately, I happen to know several 9-ish year old girls who will appreciate these guys.  So they'll get passed on to the next generation at my next opportunity.

This ends the highlights of the clearing-off-the-ridiculously-cluttered-dresser project.
Before:


Ah!  Much better!  Mr. Geek quite literally gaped when he saw what I'd done to this previously super-cluttered area.  I figure that's a reaction to be proud of.  Now to find another corner to tackle...

Posted by The Organized Geek at 08:40 0 comments

Today I love this blog that I found through the blog equivalent of Wikipedia Effect the other day.

From small tips on simplifying to dealing with a spouse's clutter without starting World War III to succinct guidelines on decluttering in general, Rachel of Small Notebook for a Simple Home is a fantastic resource on any decluttering journey.

She especially has a lot of fantastic advice on achieving a small, stylish, easy to deal with wardrobe, which is one of my overarching goals for myself.   I need to mount a major offensive on my overstuffed closet one of these days.  I own an incredible quantity of clothing but find that the same few pieces wind up in the laundry every week, while the rest just sits there.  What's the point of that?

Wouldn't it be great if we only had to purchase, clean, maintain, and look at our very favorite things?

Also, I love my cast iron pan.  I got it at a yard sale, and the clueless yuppies who just wanted this chunk of metal gone after cleaning out their grandmother's attic sold it to me for $5.  Best $5 I've ever spent.  I've discovered through setting up camp kitchens that I can cook almost anything if I have my trusty cast iron, a teakettle, and my Le Creuset dutch oven.  It kind of makes that huge stack of frying pans that barely fits in the kitchen cabinet seem just a trifle superfluous...
Posted by The Organized Geek at 09:49 0 comments

I've been tragically derelict in my blog-writing duties of late.  So here is my much belated financial retrospective for March. 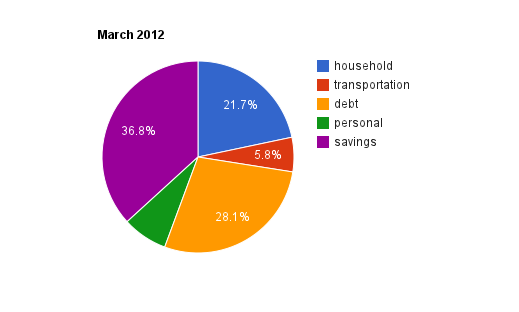 In terms of expenses this month, the most notable things were tickets to two separate food festivals (and associated purchases), and quite a lot of money going toward a big camping event in Arizona.  Mr. Geek and I both play in the SCA, a group of silly history buffs who dress up in medieval clothes and hit each other with sticks.  March saw the second largest SCA event in the country, and so there are tickets, travel expenses, and gear for my camp kitchen on my spreadsheet.  Fun, but pricey.  But sometimes fun is worth it.  Frugality means not spending in some areas so that you have the ability to spend on the things you actually care about.  It's a good goal.

How am I doing on my mission to curtail food spending?  Not so hot.  March's 'grocery' entry is the largest of this year, but part of that was due to feeding several people out of my camp kitchen for a long weekend.  They did help offset the cost, though.  I fear that I must devise more active methods of reducing the grocery budget, for the simple 'try to spend less' approach seems to not be working.

This month we see the glorious arrival of a fifth, purple pie slice in the chart, one marked 'savings,' thus indicating that for once I did not violate the master equation.  For my documentation purposes, 'savings' is defined as the difference between income and expenditures.  While this situation was largely established due to luck rather than discipline, I'll take what I can get.

In my mission to re-build my checking account cushion I failed miserably right up until the end of the month.  Despite my best efforts (and not overpaying on debts past my allotted snowball, no matter how much I wanted to), there I wound up, back at the same not terribly sizable balance.  Fortunatly, March has a bonus pay period in it.  Yes, it still means that the money from that paycheck must cover two weeks of groceries and fuel and the like, but it is effectively exempt from monthly expenses such as credit cards, car payments, and my membership in my commuting vanpool.  This left me with more money than expected at the very end of the month.  So while I can't attribute this month's success to any victory in personal planning and I didn't get to use my bonus paycheck for anything particularly interesting as suggested in the article linked at the beginning of this paragraph, I have technically succeeded at this month's mission to re-establish my cushion.  Huzzah!
Posted by The Organized Geek at 08:04 0 comments